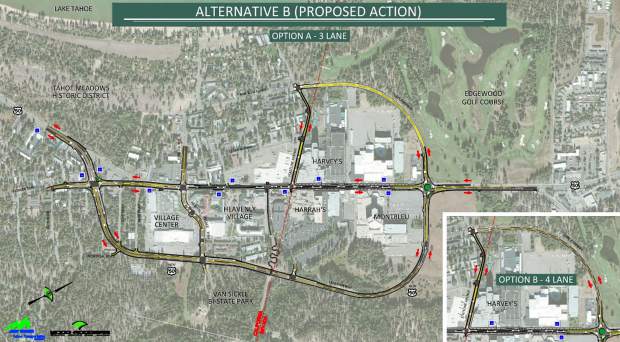 SOUTH LAKE TAHOE, Calif. — City Council solidified its desire Tuesday to have a say in the development of affordable housing related to the U.S. 50 South Shore Community Revitalization Project. It also set the stage for a future discussion on a possible ballot question asking voters if they support the project — commonly referred to as the Loop Road.

Councilor Tamara Wallace received support from Councilor Devin Middlebrook to put the discussion on a future agenda at the end of Tuesday’s meeting. Wallace and others have argued that a vote is crucial to help determine how the city should proceed regarding the controversial project.

Residents attempted to take similar action in 2016 when they successfully put Measure T on the ballot. Not to be confused with 2018’s Measure T that deals with vacation home rentals, the 2016 ballot question asked voters if city decisions on the Loop Road project should be put to a vote of the people.

Measure T opponents argued that the Loop Road project is a federal project and the city has little to no decision making power on whether the project proceeds.

A court eventually ruled the measure was unconstitutional.

Despite being struck down, Loop Road opponents say the outcome of the 2016 Measure T is evidence that South Lake Tahoe residents want to have a say when it comes to the Loop Road.

Middlebrook said he supported having the discussion but at the appropriate time. He pointed to work on the Main Street Management Plan, which is focused on what the old U.S. 50 alignment will look like once the highway is realigned behind the Stateline casinos and Heavenly Village area, as an example of unknown details that he would like to have before discussing a ballot question.

Wallace also wants to see a citywide study on the potential economic impact of the Loop Road. A previous analysis looked at the impact on the project area and found that would lead to increased sales. Wallace said she would support the city making a financial contribution for the study in order to keep it impartial.

Middlebrook also seconded having that discussion at a future meeting.

AFFORDABLE HOUSING
Prior to that direction, much of the debate Tuesday centered on whether council’s approval of two memorandums of understanding dealing with affordable housing represented support for the overall Loop Road project.

The MOUs involve the city, the Tahoe Transportation District (TTD) and two developers that have an interest in building new deed-restricted, affordable housing.

The units would replace housing eliminated as part of the Loop Road. As many as 76 housing units in the Rocky Point neighborhood could be eliminated.

In July a pair of MOUs between TTD and the developers came before the district’s board. Councilor Cody Bass, who represents the city on the TTD board, voiced his desire to see the city be part of the MOUs because the proposed projects fall within city limits.

The board agreed and the MOUs were presented to council at its Aug. 6 meeting. The matter was postponed until the Aug. 20 meeting to allow Mayor Brooke Laine, who was absent, to participate.

WHAT DO THEY DO?
As staff explained Tuesday, the MOUs are largely a first step in the process. They are not approvals of the actual development projects — that would come later. Rather, they’re agreements stating all the involved parties will work together.

The MOUs grant the city the ability to review preliminary budgets for the project costs. They also allow the developers to request the city apply for grants to assist with financing or to offset funding shortfalls. It also allows the city, TTD and developers to continue working together to identify additional funding opportunities and additional sites that could be used for affordable housing.

The MOUs also acknowledge that TTD and the developers may seek to amend the city’s tourist core area plan in order to annex parcels owned by the developers.

A SIGN OF SUPPORT?
Slight changes were made between the Aug. 6 and 20 meetings, including the addition of a paragraph stating that the MOUs express support for affordable housing, not the Loop Road project, which the city reserves judgement on.

Still, Loop Road critics called on council to reject the MOUs as written.

Former City Manager David Jinkens described the MOUs as a “trap” to advance the Loop Road project. He said they were “bad public policy.”

Longtime resident Lou Pierini said approval of the MOUs would advance the Loop Road project and put the issue of eminent domain — the process by which the government seizes private property — on council’s plate.

Although most did, not everyone who spoke opposed the Loop Road project. Tamara Allen, a Rocky Point resident who sits on the stakeholder working group for the Main Street Management Plan, said she supports the highway realignment project but would like to see the replacement housing built closer to the Rocky Point neighborhood.

One of the developers, Pacific Development Group, is proposing affordable housing at the corner of Ski Run Boulevard and Pioneer Trail, which is farther away from the job hub of Heavenly Village and Stateline.

Carl Hasty, TTD district manager, explained that in order to develop housing in Rocky Point now, somebody would have to acquire a parcel, demolish what is currently on it and then build.

He said the timeline for developing the replacement housing — 76 units need to be constructed before the start of the Loop Road project while the other 33 will be constructed concurrent with the project — is designed to allow for the possible construction of housing within the project site, which might be more feasible once the land for the highway realignment has been acquired.

DEVELOPMENT DETAILS
Local attorney Lew Feldman, speaking as a representative of Pacific Development Group, said it actually started the process of acquiring land at the corner of Ski Run Boulevard and Pioneer Trail two years, long before TTD was required to build replacement housing as part of the Loop Road.

The company, Feldman said, has a history of developing affordable housing in the community, including the Sierra Garden apartments.

Pacific actually approached the previous City Council about a possible partnership opportunity but that council did not express any interest in the idea, Feldman said. That led Pacific to turn to TTD for a potential partnership.

Echoing a point frequently iterated by builders and developers, Feldman said the only way affordable housing can pencil out financially is if a subsidy is provided.

Pacific, he added, welcomes involvement by the city but if the deal were to fall apart then the company would likely look to develop market-rate condos on the parcels.

That argument — that development is moving ahead with or without the city’s involvement — stuck with a majority of the councilors.

However, Wallace objected to the MOUs because of the connection to the Loop Road.

She suggested removing TTD entirely from the agreement and entering into an agreement with the developers. She also suggested striking a majority of the MOUs’ recitals, which are primarily statements of fact — and do not have any legal bearings on the MOUs — regarding the Loop Road and various entities involved in the MOUs.

After a lengthy and detailed discussion, council came to an agreement on language that was less binding for the city and less ambiguous in terms of withholding support for the Loop Road project.

Council also added a line allowing each party to exit the MOU with five days notice — a provision that Bass said was in the original MOUs between TTD and the developers.

The MOUs are slated to be considered at the TTD board meeting in September.